When mitigation bankers sponsor a habitat restoration project, there are many moving parts from the financial perspective. Of course, the project must meet regulatory goals, protect the environment, and be profitable. But the habitat restoration site at one phase is also a construction project, then a developing ecological habitat, and then a completed mitigation bank that is ultimately turned over to a care-taker (long term manager). The multifaceted nature of bank sponsorship can result in confusion of various financial concepts.

The basic premise behind mitigation banking itself is that an independent party, or bank sponsor, creates a habitat project that is a legal and binding solution to the liability of another entity towards offsetting wetland or other habitat loss. Originally driven by the Clean Water Act’s emphasis on no net loss of wetlands, any entity that damages wetlands is obligated to offset or replace them through a mitigation project. The mitigation banker steps in to solve this liability for the entity damaging wetlands.

Perhaps the single most confusing part of mitigation banking is discerning the difference between Financial Assurances and Endowments. These concepts come into play in different phases of a typical mitigation banking project, but both involve a monetary component and a third-party. The similarities end there.

The Financial Assurance guarantees the successful construction and establishment of a project, whereas the Endowment is cash in place to finance the long-term management of a mitigation project after it has achieved its success. It is easiest to understand the difference between these two notions when thinking about the timing of each concept. 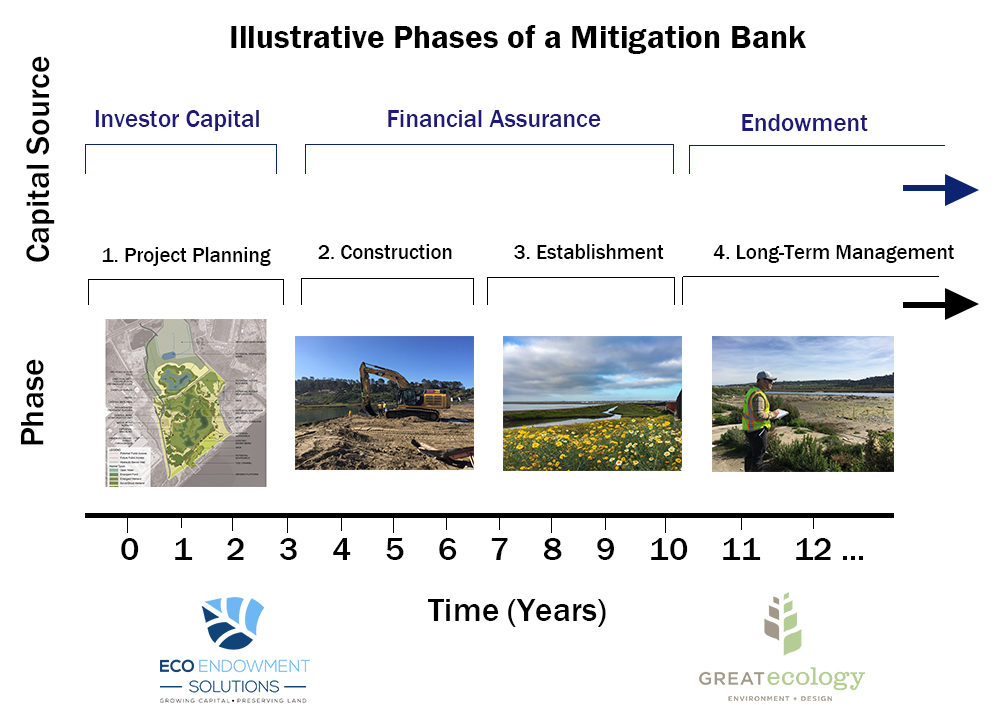 Project Planning - In the first phase, project planning, there is an initial due diligence period undertaken by the mitigation banker to evaluate the project’s financial, regulatory and ecological viability. The project can enter the design and permitting phase once the banker (or project sponsor) determines that:

In some jurisdictions and at certain sites, permitting and design can be a relatively quick phase – 18 to 24 months. In other locations, this phase can drag out for years, due to any number of factors. Project planning formally ends when the project receives all permit and regulatory approvals. Upon permit approvals, a percentage of offset credits become available for the sponsor to sell to entities in need of mitigation, and the legally binding liability transfer begins.

Construction and Implementation - This second phase begins after the project has been fully permitted by Federal and State (and sometimes local) natural resource agencies. After the bank sponsor has arranged financing, site work commences.

Construction is as varied as a landscape. Grading or recontouring of the land—on a large or small scale--may be included as part of habitat restoration. There could be significant hydrological changes, such as: • Opening a freshwater or upland site to tidal inundation; • Increasing the size or shape of a pond or lake; • Changes to the depth or nature of a shallow habitat shelf; • Stream channel recontouring and stabilization; and • Relocation or creation of new waterways. It’s possible that major vegetation restriction occurs, such as removing invasive species, replanting native species, and increasing ecological performance through a variety of mechanisms, features, and amenities.

Although not every project will require large scale changes, like some of the ones described above, construction is always a component of taking a poorly functioning habitat and converting it into an improved ecological system. Financial Assurances are used during the construction period to ensure the project is built to the design standards approved in the permits. The language from the federal Mitigation Rule of 2008 states :

The district engineer shall require sufficient financial assurances to ensure a high level of confidence that the compensatory mitigation project will be successfully completed, in accordance with applicable performance standards. [33 CFR 332.3(n)(1)]

The amount of the required financial assurances must be determined by the district engineer, in consultation with the project sponsor, and must be based on the size and complexity of the compensatory mitigation project, the degree of completion at the time of project approval, the likelihood of success, the past performance of the project sponsor, and any other factors the district engineer deems appropriate … [33 CFR 332.3(n)(2)]

Thus, a Financial Assurance established during construction acts like a bond to ensure the project is constructed as planned and approved during the regulatory phase.

Establishment – The third phase, establishment, occurs when the construction is complete and the site enters the time period when succession and ecological dynamics start to take place. Over time, plants begin to grow, reproduce, and mature into suitable habitats. New vegetative species arrive to create a biodiverse community and fish and wildlife respond by expanding into the new or improved habitat. Wildlife can then reproduce onsite and the habitat begins to perform in the way the ecological designers planned.

Typically, a project has restoration goals and objectives it must meet to achieve its ultimate performance criteria successfully. Most commonly, the performance criteria are measured by regular monitoring of biological and hydrological parameters such as vegetative cover, tidal prisms, or invasive species density. These monitoring protocols and the success criteria themselves are negotiated during the initial permitting process. Historically, wetland mitigation projects tend to reach “success” after five years but this can vary widely from site to site. During this five-year monitoring phase, Financial Assurances are kept in place, although their form may change and the capital amount may diminish over time as the site moves closer to achieving its success criterion.

According to the 2008 Mitigation Rule, Financial Assurances:

[M]ay be in the form of performance bonds, escrow accounts, casualty insurance, letters of credit, legislative appropriations for government project, or other appropriate instruments subject to the approval of the district engineer.

Several third-party companies offer insurance products, bonds, and other assistance to mitigation bankers for Financial Assurance. Some of the larger mitigation companies and those backed by strong financial partners can self-finance through letters of credit or other mechanisms. And for the relatively few government projects in place, various instruments have been used to provide the assurance needed. These are all in place such that if a project experiences unexpected turbulence, perturbations, or outright fails to perform, the regulators and sponsors would have the capital resources to draw from to make course corrections to the biological development of the project.

Long-term Management – The fourth and final phase occurs once a site has achieved its pre-approved success criteria or has been in existence for five years or some other determination as decided during Phase 1. In Phase 4, the project is deemed complete by the regulators. Once completed, there are two main financial changes. The first is that the Financial Assurance is no longer necessary – the bond is closed, insurance policy cancelled, the letter of credit is not renewed. When the project is successful and complete, it has reached a point of self-sufficiency and should not require significant actions towards ecological function.

The second major change is that the bank sponsor turns the property over to a third-party, long-term manager and the site is protected with a conservation easement (which may be in place from the beginning of the project). Sometimes, the bank sponsor itself can be the manager. Other times the land and/or management responsibilities are turned over to a government entity. But most commonly, the long-term management is performed by a non-profit entity, such as a land trust, or a non-profit site manager. The 2008 Mitigation Rule states that the sponsor is supposed to:

[T]ransfer the long-term management responsibilities of the compensatory mitigation project site to a land stewardship entity, such as a public agency, non-governmental organization, or private land manager, after review and approval by the district engineer.

At this stage, the endowment kicks in – although it was likely set up several years before long-term management commences. The endowment, also called a non-withering trust, is a pool of invested capital that generates a return. This return is used to finance the long-term management of the site. This raises the question – how long does this phase last? Under the Clean Water Act and the virtually all state rules, this phase lasts “in perpetuity” which can mean something between 30-50 years and forever. Is that realistic? Well, that is a topic for another blog.

Appropriate long-term financing mechanisms include non-wasting endowments, trusts, contractual arrangements with future responsible parties, and other appropriate financial instruments. In cases where the long term management entity is a public authority or government agency, that entity must provide a plan for the long term financing of the site.

The most used mechanism is an endowment, held sometimes by the long-term manager, and sometimes by a third-party. No matter what the form, the financing mechanism is designed to finance, in full, the long-term management of the site in this last phase. The requirements of what the long-term manager is obligated to do comes from an “Adaptive Management Plan” and a “Long-term Management Plan” as part of the approved documents created during the planning phase. These are required documents and provide the ultimate roadmap, including how much money is required for the implementation of this plan.

Eco Endowment Solutions (EES) is a third-party endowment holder, which creates customized portfolios designed to generate the funds needed for the long-term management of mitigation projects. EES’s Registered Financial Investment Advisor, Russell Silberstein invests directly in equities, fixed income, real estate, and private equity creating customized portfolios for each Endowment. EES is the only private company specializing in endowment management for the mitigation banking industry. EES provides its services to bank sponsors to set up an endowment during the planning phase or later phases, and to the designated long-term manager to assist in financial planning for perpetual management of a site.

In 2020, the United States EPA and the Army Corps of Engineers plan to update the 2008 Mitigation Rule, bringing the prior guidance to the modern era and benefiting from the experience of the past 12 years on mitigation banking. We will be watching to see how these components evolve or change from where they are now.