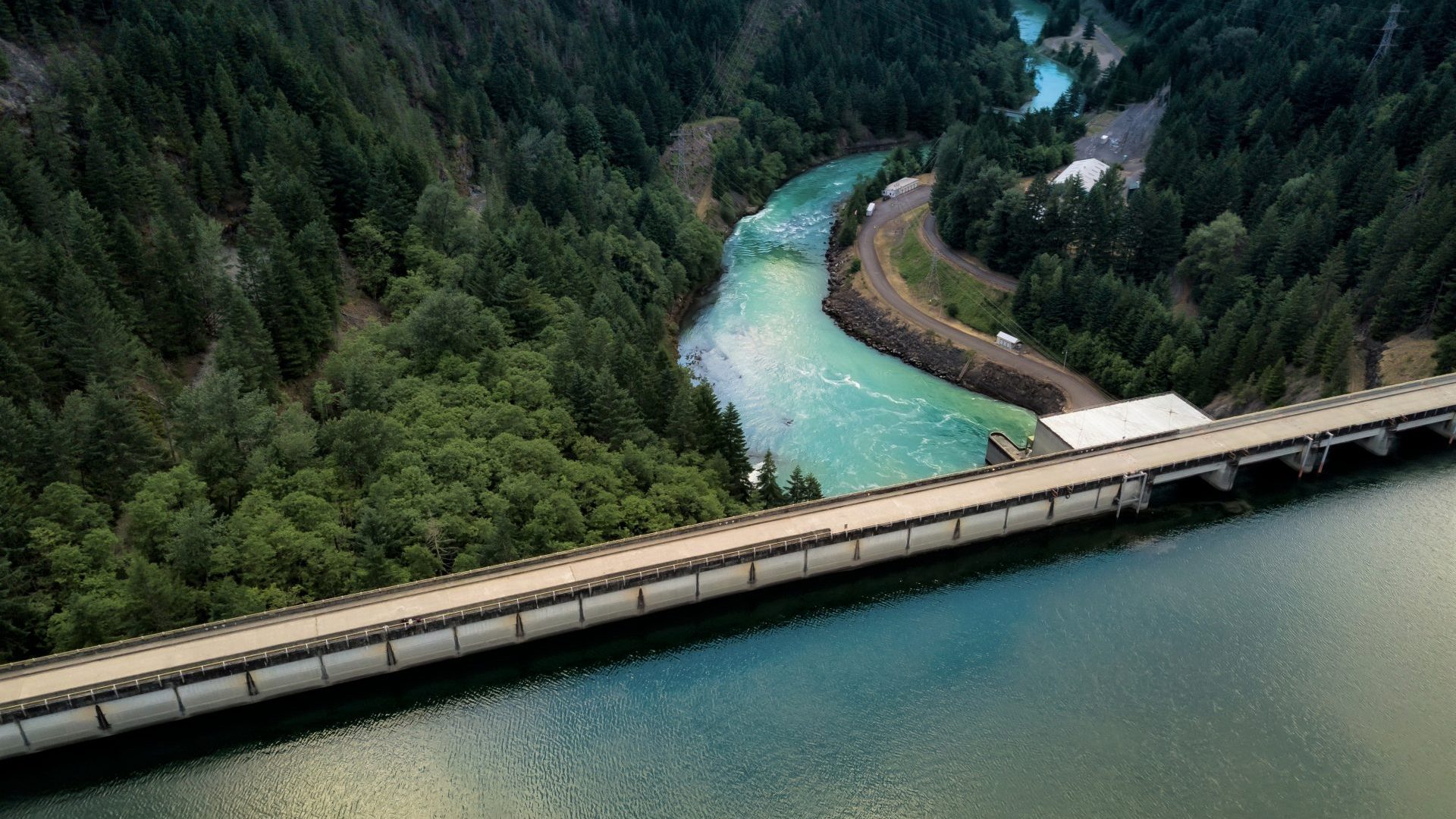 Dam removal is a hot button topic right now, particularly for people who live or work on the West Coast.

Dams have long existed in large swaths of North America—generally in the form of beaver dams or log-jams (say, after a mudslide or avalanche), or low-slung manmade dams, which are generally lower and have relatively easy options for passage by other animals. Beaver dams and logjams historically helped create some of the rich “bottomlands” in the US that are prime farming areas. Manmade dams, historically like today, relied on a steady flow of water—and were also used for power generation (think water mills as well as early hydroelectricity).

However, only in the relatively recent past have people in the United States built very high dams that are relatively impenetrable by species that live in the river, and which effectively trap water and nutrients for long periods of time.

To put into perspective how recently we’ve been building large dams in the US, the Hoover dam, which was the largest dam in the world when it was completed, isn’t even 100 years old yet!

Over the years, there have been various efforts to make dams more passable for fish—and not all of it is recent as far as our memory of current events go. In Washington state, for instance, early fish passage legislation dates back to the 1890s and more recently other dams have been designed (or retrofitted) to include options for fish passage. Unfortunately, research suggests that fish ladders and elevators aren’t working—and even if they were, they only address one of myriad issues that dams create along a waterway, which brings us back to the issue of dam removal.

Dam removal isn’t an especially new trend on the West Coast—a number of dams have already been removed. This includes the removal of the Elwha dam (2011-2012) and the Glines Canyon dam (2014), which allowed the Elwha River, in northwestern Washington to flow freely from its headwaters to the Strait of Juan de Fuca.

The removal of the Elwha and Glines Canyon dams was no small feat—it took two decades of planning—and people are still studying the effects of dam removal on the Elwha River. However, there’s already evidence of salmon returning to the river, that shoreline erosion has slowed and accretion (accumulation of sediments in an area of a river, or at a river’s delta) is beginning to occur, and that the river is stabilizing in regard to sediment load, among other benefits.

While that was a large dam removal effort (as of this writing, the largest in the United States), many small dam removal efforts have also taken place in the western US. Just to name a few, this includes 81 dams in the Cleveland National Forest in southern California and five small dam removals in Oregon. The City of Bellingham, Washington, along with other project partners, recently completed the Middle Fork Nooksack River Fish Passage project, which creates more habitat connectivity and allows better fish passage.

And there are more dam removal efforts afoot.

Four hydroelectric dams on the Klamath River, which runs 250 miles from Oregon to California, are slated to be removed. The first dam in this project is currently anticipated to be removed in fall 2023—after some additional studies on expected impacts for the plants and animals of the Klamath Basin are completed. The Klamath was once home to the third-largest salmon runs in the lower 48—and returns now stand at a fraction of historic precedent. Dams on the Klamath, as with other rivers, have been identified as one of the reasons for the decline in salmon returns—and the salmon population in general. Once completed, this project will supplant the Elwha River dam removal projects to become the largest dam removal project in US history.

On the Eel River in California, which crosses five counties, two dams are slated for removal—and once the removal of those dams is complete, the Eel will be the longest free-flowing river in all of California. The removal of these dams will restore access to more than 280 miles of spawning and nursery habitat for salmon, lamprey, and steelhead—and will likely go a long way to improving the water quality of the river, as sediment is allowed to again flow downstream.

In Washington, there is a proposal to remove four dams along the Lower Snake River—which will help promote fish passage. There is a lot of debate on what the removal of these dams will mean for power generation, but there is also indication that the power generation that would be lost by removing dams can be made up for by other clean sources of energy. Removing these dams may also alter how goods are transported from inland areas to port cities—and may mean more miles by rail or truck. The debate about removing these dams has already been going on for decades, but has recently taken on more steam, particularly in the face of greater recognition about the loss of wild rivers and the ways that the Southern Resident Killer Whales (SKRW) have been impacted by lower salmon returns.

I bring up these counter arguments to dam removal, because while they’re true for the Lower Snake River, many of these arguments come up for other dam removal projects around the country. It can be scary to think about a loss of water for agriculture, transportation of goods or people, or the loss of power. Many of the impacts from the shifts that would occur also come with some level of planned mitigation (including through existing infrastructure) by people who are proponents of dam removal.

Damming a river cuts the river into pieces, which can cause water to heat up and alter the accretion and distribution of sediments in a river, which can cause reduced water quality as well as impairing the forage and reproductive habits of insects, fish, birds, and more. This can impact the culture and livelihoods of people who depend on healthy riparian habitats.

Dams trap sediment in concentrated areas, and as the Glen Canyon Institute succinctly puts it, “Ultimately, all dams fill with sediment or are destroyed by natural floods.” While there can be ways to slow the accumulation of sediment behind the dam, many of those management efforts are costly and then there is still a need to figure out the timing and method of sediment removal as well as where those sediments go—particularly since the sediments may be contaminated. Trapped sediment can also mean that communities near dammed rivers are at increased risk of severe flooding (even if some of them are also at reduced risk of minor flooding).

On top of the sediment issue, dams are difficult to maintain—and a number of dams in the US are currently aging out of their expected lifespan, which can increase the risk of catastrophic failure. While there may soon be money, via low interest loans, pumped into repairing and restoring this aging infrastructure—it isn’t nearly enough according to estimates by the Association of State Dam safety officials. That should worry us all—because a dam that fails could cause catastrophic losses of life and have significant economic impacts.

Dam removal projects are effectively also river restoration projects—and that comes with numerous benefits. As mentioned earlier, dam removal projects enable trapped sediment to flow downstream, which allows for better natural accretion along the river—and at the mouth of the river, which can help curb the loss of important coastal wetland areas. Dam removal projects also allow nutrients to move back upstream from the sea, via anadromous fish, which benefits large predators (including bears, wolves, and raptors) and improves forest health. Because water from rivers that have had dams removed is able to move faster, it heats up less, which is important for certain fish and insect species.

Dam removal effectively allows rivers to run free again, which can benefit all sorts of species, water quality, and people.

While the controversy around dam removal is unlikely to recede any time soon—particularly with growing concerns about water and power generation in the west—it’s also likely that more dam removal projects will be proposed in the coming years. Hopefully, as more of these projects are implemented and as people have more models to look toward, we will collectively be better able to talk about the real (rather than imagined) changes that will come from any given dam removal project.